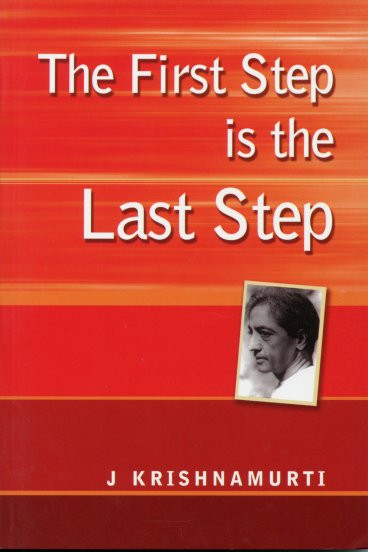 "The First step is the last step. The first step is to perceive - perceive what you are thinking, perceive your ambition, perceive your anxiety, your loneliness, your despair, this extraordinary sense of sorrow. Perceive it without any condemnation, justification, without wishing it to be different, just perceive it as it is. When you perceive it as it is, then there is a totally different kind of action taking place, and that action is the final action. That is when you perceive something as being false or as being true, that perception is the final action, which is the final step." - J. Krishnamurti

This book consists of the talks Krishnamurti gave in New Delhi, Madras, Bangalore, and Bombay between December 1970 and February 1971. The title is a summing up of many of his statements that form the common theme of these series of talks. For those who have gone seriously into Krishnamurti's teachings, this book offers strikingly new perspectives on man's ancient quest for self-knowledge.