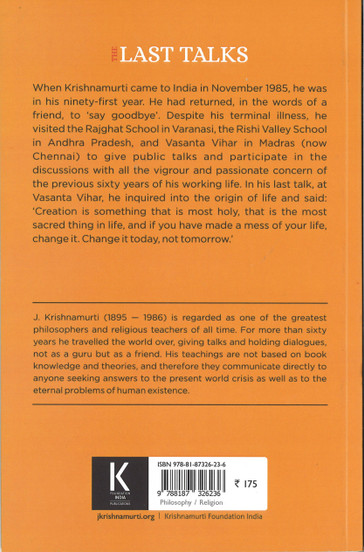 When Krishnamurti came to India in November 1985, he was in his ninety-first year. He had returned, in the words of a friend, to ‘say goodbye’. Despite his terminal illness, he visited Rajghat School in Varanasi, the Rishi Valley School in Andhra Pradesh, and Vasanta Vihar in Madras (now Chennai) to give public talks and participate in the discussions with all the vigour and passionate concern of the previous sixty years of his working life. In his last talk, at Vasanta Vihar, he inquired into the origin of life and said: ‘Creation is something that is most holy, that is the most scared thing in life, and if you gave made a mess of your life, change it. Change it today, not tomorrow.’