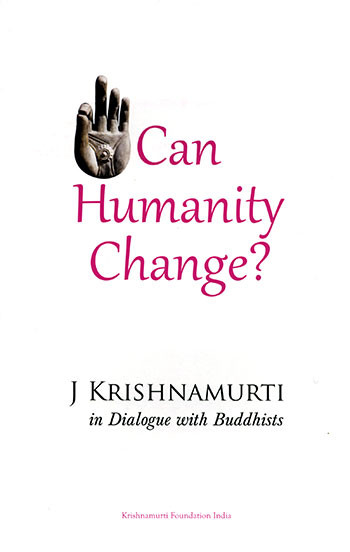 Discussions between Krishnamurti and a group of Buddhist scholars provide a unique opportunity to see what this great teacher had to say about Buddhist teachings. The conversations, which took place at Brockwood Park, England in the late 1970s, focus on human consciousness and its potential for transformation.

When asked about following a guided practice Krishnamurti said,

"Oneself is already secondhand, living in the shadow of others, so why look to others?"

Is what is happening in the world pointing to the need for a fundamental change in human consciousness, and is such a change possible? This is an issue at the heart of both Krishnamurti's and the Buddha's teaching, and in 1978 and 1979 the eminent Buddhist scholar Walpola Rahula came to Brockwood Park in England to put questions that had occurred to him from his reading of Krishnamurti's books.

The future Chancellor of the Sri Lankan University of Buddhist and Pali Studies, Walpola Rahula was an acknowledged authority on both the Theravada and the Mahaynana schools of Buddhism. He had lectured at universities around the world, and was the author of the article on Buddha in the Encyclopedia Britannica. He had also written a widely known introduction to Buddhism, translated into many languages, called What the Buddha Taught. He was accompanied by Irmgard Schloegl, a well-known teacher of Zen Buddhism and for some years the librarian of the Buddhist Society of London.

Nearly all the conversations, in which the physicist David Bohm and the scientist and author Phiroz Mehta also participated, start with Dr. Rahula raising an issue of crucial importance for any radical change in the way we usually see ourselves, others, life, and death. The nature of personal identity, whether there is a relative truth and an ultimate truth, and the distinction between insight and intellectual understanding are all topics on which he argues that the Buddha and Krishnamurti have said substantially the same things. He also explains to Krishnamurti that in his view the original teaching of the Buddha has over the centuries been in many ways misunderstood and misinterpreted, particularly with regard to the nature of meditation and the form of meditation known as satipatthana, or “mindfulness.”

On each occasion, however, instead of discussing whether Dr. Rahula's argument is right or wrong, Krishnamurti moves the debate into quite a different direction. Why, he asks, compare? What is the value of such comparison? Why bring the Buddha into the discussion between the two of them? Courteously, and with a lightness of tone, Krishnamurti challenges Walpola Rahula to say whether he is taking part in the conversation as a Buddhist or as a human being, whether he considers that humanity is in any sense progressing psychologically, what he understands by the word “love”.