Commentaries on Living: Series I 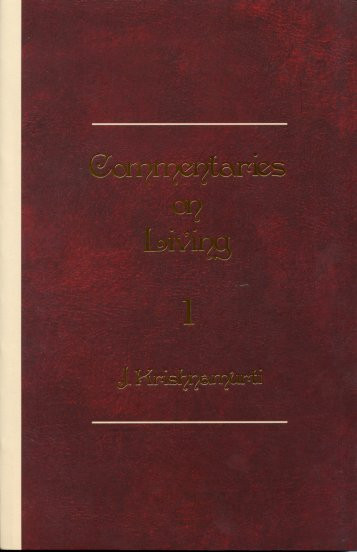 Commentaries on Living: Series I

"This is a compelling book which brings people of the spirit and environment under the same umbrella." - Satish Kumar. These brief chapters combine descriptions of nature with an examination of basic human psychological problems as these arise in conversation with the many people who came to speak privately with Krishnamurti. The three volumes of Commentaries on Living are among the easiest of Krishnamurti's books to read even though they discuss the major questions of ambition, the nature of wisdom, fear and what is true action. Aldous Huxley encouraged Krishnamurti to write these commentaries on life, which consists of a series of dialogues with ordinary human beings whom Krishnamurti met in different parts of the world. Set in India, Europe and America, against a variety of landscapes, the encounters recorded here are both intense and illuminating. The Commentaries on Living Series represents an entirely new genre of writing - a blend of lyrical descriptions of nature, philosophical reflections and psychological insights, all informed by a deeply religious sensibility and couched in lucid, absorbing prose.