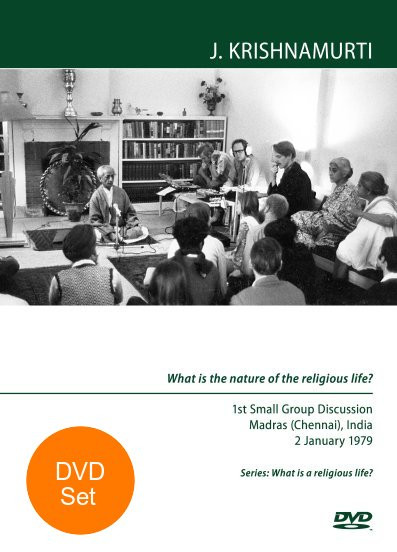 What is the nature of the religious life?

Does knowledge interfere with a religious life?

The movement away from the fact does not bring about the understanding of the fact.

When there is suffering, is that suffering a concept?

Why does the registration of pain take place?

The field of the known.

Consider a quiet pond, absolutely quiet, and you drop a stone into it. When the waves are over it is completely normal again. The normality is non-registration, because it’s back to its original condition.

A religious life is a life which is holistic, with total insight into the whole structure and nature of consciousness and the ending of that.

What is a religious mind?

Thought in itself being a fragment, whatever it does will bring about fragmentation. A religious mind is not fragmentary.

In religious life there is a total absence of the self.

Can I be free from my daily little rituals, from nationalism and from following an authority?

The very watching is the transformation of that which is being observed.

Examining the fragments in my consciousness is endless.

What is the root of fragmentation?

What is a holistic perception?

Is it possible to find a religious way in a modern world with all the technological advancement and crumbling relationship?

We are trying to examine a way of life which is non-fragmentary, holistic, whole. Perhaps that will lead us to a truly religious life.

Can the fragmentary movement end?

Has consciousness the capacity to observe itself?

Can thought become aware of itself?

If there is an observation which is not of the observer, that observation operates on the whole of consciousness.

Can I observe my wife or husband without accumulated memory?

When you put away something false, your mind is lighter.