The transformation of man 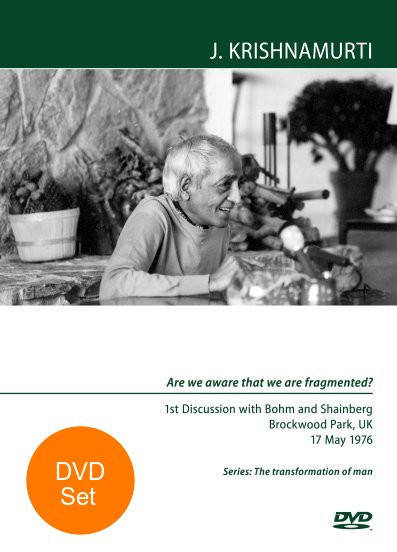 The transformation of man

Are we aware that we are fragmented?

How can one be aware of the wholeness of life if one is fragmented?

I am a fragment and therefore am creating more fragments, more conflict, more confusion, more sorrow. Is the centre the very cause of fragmentation?

Does the beginning of fragmentation take place when I am seeking security?

Is security in knowledge, used wrongly, one of the factors of fragmentation?

Can I be free of the desire to be psychologically secure?

A mechanical way of living leads to disorder

Is there psychological security at all, a sense of well-founded, deep-rooted existence?

When you hear that there is no security, is it an abstract idea or an actual fact?

My security lies in some image, a picture, a conclusion, an ideal.

The brain needs order in order to function. It finds order in mechanical process because it is trained from childhood to do so.

Can I completely change at the very root?

Why do human beings live in such appalling misery, accepting it for millennia?

Is it possible for a human being to change at the very root of his being?

Who is going to tell me? Is it Marx, Lenin, Mao, the Pope, or the local priest? Authority exists because human beings are in disorder. In the rejection of authority I become very sane. When I reject authority I have more energy.

What is correct action in life? I can only find that out if there is no disorder in me. ‘Me’ is the disorder. However ‘real’ the ‘me’ is, it is the source of disorder.

In aloneness you can be completely secure

Do human beings not radically transform themselves because they are really frightened not to belong to a group, to something definite? Are they afraid to stand completely alone?

Alone is all one, when there is no fragmentation. That is total order.

Can we step out of the stream of this utter confusion, disorder, sorrow, hope, travail, and despair?

Our whole society, all religion, all culture is based on thought. Does thought realize it has made this mess, this chaos? Is thought aware of itself as a movement, which brings about a fragmentary action?

When the movement of thought comes to an end, there is total action.

When you are faced with fact, there is no fear.

Your image of yourself prevents relationship with others

Is there such a thing as the unconscious?

The process of fragmentation is a state of mind that divides, that says there is the unconscious and the conscious.

Every human being has an image of himself of which he is unconscious, not aware. What is the origin of making images about oneself?

Who is the image-maker? What is the machinery or the process that is making images? Our consciousness is our images, conclusions, ideas. If there is no image-making then what is consciousness?

If one remains with the fact there is a transformation.

Any form of image prevents the beauty of relationship

What will bring about a radical transformation in the total consciousness of human beings?

Right relationship begins with the realization of the responsibility I have for myself.

Is the observer different from that which is observed? If there is a difference between the observer and the observed there is division, and therefore conflict.

My consciousness is the consciousness of the world because it is filled with the things of thought sorrow, fear, pleasure, despair, attachment. In that state you cannot have any relationship with any human being.

When there is no movement of thought, which is the image-making, what then takes place? When there are none of the things that create division, what comes into being?

Do you know what it means to love somebody?

Without compassion, human beings are destroying themselves.

Is compassion the result of the ending of sorrow, the universal sorrow?

Introduction to 'The transformation of man' series

Introduction to 'The transformation of man' series