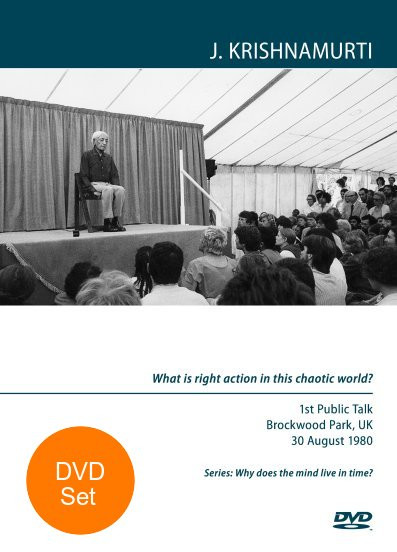 What is right action in this chaotic world?

Psychologically, we are the world. And the world is us, each one of us.

Our responsibility is something global, not just for one's family, for one’s children; those are important, but we are responsible for the whole of mankind because we are mankind.

Can one actually be free of all attachment?

Thought by its very nature is fragmentary, and we, our struggle, the whole of our being, is the movement of thought.

Technological, surgical, engineering, scientific knowledge is necessary, but the knowledge that has psychologically accumulated through millennia as human beings, is that necessary at all?

Can this movement of thought end?

Can the brain transform itself?

Can the brain change itself completely?

Desire has significance and vitality only when thought creates the image.

Insight can only take place when knowledge has come to an end and there is merely pure observation, without any direction.

Is it possible to live together without a single image?

Can there be discontent by itself, or is it always associated with something?

Can the mind be free of all comparison?

Q1: You have spoken so much against organisations, so why do you have schools and foundations? And why do you speak?

Q2: Is it always wrong or misguided to work with an enlightened man and be a sannyasi?

Q3: You say that fundamentally my mind works in exactly the same way as everyone else. Why does this make me responsible for the whole world?

Q4: When I listen to you there is an urgency to change. When I return home it fades. What am I to do?

Q5: Is suffering necessary to make us face the necessity to change?

Q6: My problem is I have a ten foot wall around me. It is no use trying to overcome it, so I ignore it. It is still there. What do I do?

Q7: I derive strength from concentrating on a symbol. I belong to a group that encourages this. Is this an illusion?

Q1: What is the relationship between thought and consciousness? Why do we seem unable to go beyond thought?

Q2: Does compassion spring from observation, or thought? Is not compassion an emotional feeling?

Q3: Why is it that in the balance of nature there is always death and suffering?

Q4: Why do you say attachment is corruption? Are we not attached to those we love?

Q5: You say we are the world but the majority of the world seems to be heading for mass destruction. Can a minority of integrated people outweigh the majority?

Q6: Christian mystics describe certain forms of mental prayer in which they speak to God, or what they call God. They say that in such prayer something tremendous happens which they call union with God. They are convinced this is not an illusion. Are they deceiving themselves? And what is faith? It appears to give people the power to do extraordinary things.

Q7: If there is a supreme truth and order why does it allow mankind to behave on earth in such a shocking way?

Q8: I have been a member of a Gurdjieff group. I find it has given me a background to better understand what you are saying. Should I continue with such a group to possibly help others, as I was helped? Or does such a group make for fragmentation?

Q9: What is freedom?

What is the relationship between the inner and outer confusion?

Why is there this inward disorder which naturally must express itself in outward disorder?

Can there be absolute order?

What is the cause of the division in us as well as in the world?

Detachment is attachment. If I try to become detached I am attached to that detachment.

When there is complete attention there is no confusion.

If you realise that fear is you there is no movement to be made.

Pleasure, love, suffering, fear are all entangled, all interrelated.

You must have a mind that is capable of receiving the whole universe, and that is possible only when the mind is clear of confusion and fear.

Truth is not yours or mine. It has no path to it.

A mind that is religious does not belong to any nationality, has no belief, but such a mind has exercised the quality of doubt so that it questions, doesn’t obey the edicts of any religion, sect or guru.

Because we allow time, the fact becomes important. If there is no time, it is resolved.

Can you end your attachment instantly – your anger, your violence, your greed, end while living?

Why should I take a certain position to meditate? Why should I practise – to arrive where?

When the mind is absolutely silent, without any movement of thought, then perhaps you will see something; perhaps there is something sacred beyond all words.