Truth demands a mind that is totally free 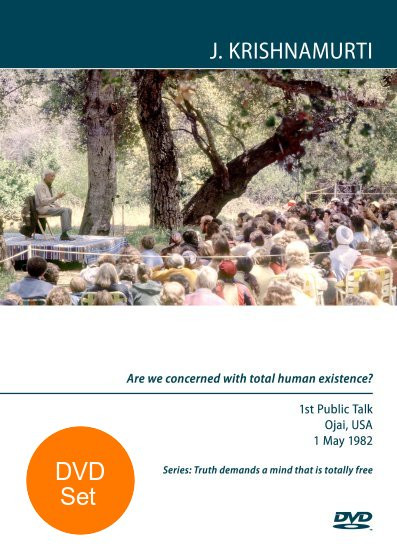 Truth demands a mind that is totally free

Are we concerned with total human existence?

How do we look at the state of the world?

We are highly educated, cunning, self-centred, capable of extraordinary things outwardly, but inwardly we are more or less what we have been for a million years: we compete, we destroy each other.

Our responsibility is not some kind of altruistic, political or economic action, but to comprehend the nature of our being; why we human beings have become like this.

Why do we hold on to nationalism?

Is consciousness yours? Is thought yours?

God is the projection of our own thought, our own demands.

Is it possible not to be hurt at all?

What is the place of knowledge in our lives?

We are together observing closely, hesitantly, attentively, the movement, the tide that goes out and comes in, which is what we are. We create the world and then by the world we are trapped.

Is it possible to transform, to bring about a mutation in the very structure and nature of our consciousness?

Is it possible to have a relationship in which there is no conflict whatsoever?

When you discover something for yourself, you have immense energy. And you need energy to free the mind of its conditioning.

What place has knowledge in life?

Q1: Our children are aware through television and other means of the threatening world they live in: the violence of crime, wars and nuclear danger. How do we help them to face this?

Q2: Great teachers have been on earth, for example, Buddha and Jesus. Do you think there will be less conflict and more understanding when you depart, or is the world moving in an unalterable direction?

Q3: My behaviour indicates that I am afraid, yet the actual perception of fear is elusive. How do I reach and deal with this deep-rooted, unconscious emotion?

Q1: The act of attention for most of us is difficult to maintain. Only a small part of one is willing, interested seriously. What can one do to nourish this attention?

Q2: What is an action and state of being that is completely pure?

Q3: Since the word is not the thing, can we truly be enlightened through words? Can symbols undo the damage done by symbols or are we being seduced by the illusion of enlightenment?

Q5: Can you speak more deeply about the meaning of holiness, and especially its place in the modern world?

Can our minds being in disorder create order?

You cannot possibly discipline the mind to become orderly, because the entity who desires order is the result of confusion and therefore whatever order it creates must bring about disorder.

Is desire itself the root, the origin, the beginning of disorder?

Why does thought interfere with sensation?

Can one live without comparing, imitating, conforming, psychologically?

Is time a factor of fear?

Can there be no psychological recording?

What are the causes of human conflict?

Human beings are so astonishingly intelligent in the technological direction. Why don’t we apply this quality of intelligence to our own lives and see whether it is possible to live without conflict?

Where there is psychological division there must inevitably, logically, be conflict.

We live a life with a sense of fragmentation, both outwardly and inwardly, which means we never feel the wholeness of life.

Why has pleasure become so extraordinarily important in life?

What is involved in attachment?

Love cannot exist where there is antagonism, competition, attachment, conflict and possession.

What is the quality of a mind that has beauty?

Q1: How do you feel about one million dollars going to educate a small, somewhat select group of children who do not appear to be suffering or destitute?

Q2: Why do we confuse function with role?

Q3: Is not political action necessary to bring about total change?

Q4: Won’t we find the truth you speak of through loving service to humanity, through acts of love and compassion?

Q5: What part do psychic healing, astral projection, the ability to see auras and entities play in all this?

Q6: What is it in humanity that has always moved towards something called religion or God? Is it only a projection as a result of fear and suffering, a seeking of help, or is it something deeply real, necessary, intelligent?

Q1: One sees that chaos in the world is rapidly increasing. Billions are being spent on arms, social justice is being eroded, governments both totalitarian and democratic are increasingly aggressive and violent. Could the speaker comment on the issue of active political involvement?

Q2: You say that out of the negative comes the positive. How does one negate the ‘I’ without suppression or denial and without conflict? Who is it that does the negating?

Q3: How does one not become a victim while not becoming a predator?

Q4: What are humility and modesty?

Where there is sorrow there is no love

Why is there no end to this terrible individualistic, competitive drive, which is destroying the world?

Can all the things which are false end - pride, arrogance, attachment, desires, pleasures – which are obviously not love? Without love, the perfume, the passion, the depth of life is lost.

Every year there is killing, wars. How many millions have suffered, shed tears, felt the flame of loneliness, and yet we apparently do not use our intelligence to stop this cruelty, this bestiality of violence.

One must go into the question: who is it that suffers?

To know oneself deeply, previous remembrance and knowledge has no place. Each incident and each response must be observed as though for the first time.

What is our life?

Is it possible to live with death all the time?

Is there anything sacred in life?

Truth demands a mind that is completely free.

What is it to be mediocre?

Is religion based upon books?

Thought can say that what it has invented is divine, but thought is not sacred, holy.

What is thought’s origin, its beginning?

Is there anything sacred in life?

There must be that silence which is not put together by desire, by will, by thought. In this meditation there is no controller.