The world of peace 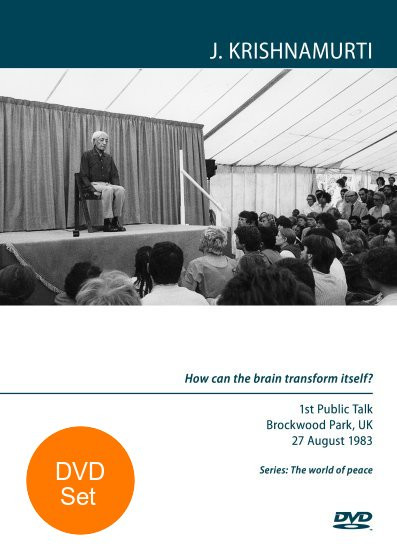 The world of peace

How can the brain transform itself?

Is it possible to bring about a mutation in the very brain cells themselves, conditioned for thousands of years? Either one says that it is not possible and closes the door or one says, ‘I really don't know.’

Without any choice am I aware that my brain is conditioned?

What is the nature of conditioning? It is essentially experience and knowledge.

Why is the structure of the psyche essentially based on knowledge?

Division between memory and the observer creates conflict.

Only in peace can the human mind be free

Why can’t man, who has learned so much, live in peace?

Are you individuals, separate souls each seeking your own fulfilment?

Must human beings, thinking they are separate, each seeking their own form of security, inevitably come into conflict with others?

Even in close relationship where there is a sense of affection, why is there conflict and turmoil? Can one live with another completely at peace?

How do you observe your relationship with another? Can you look, observe, without any identity?

From whom do you expect the answers?

Q1: How do you know what you are saying is true?

Q2: Is desire something fundamental in human beings? Without desire could we function in this world at all?

Q3: Jealousy and mistrust are poisoning my relationship with someone. Is there any solution other than isolating myself from every other human being except him?

Q: How does one break free of habits?

Is your brain free from problems?

Q1: What is the relationship between consciousness, mind, brain, thought, intellect, meditation and intelligence? Is awareness, attention still there when thought is not? Is awareness beyond time?

Q2: We can learn more from each other than by listening to K. Why don’t you encourage people to hold group discussions on particular topics and have organised activities to facilitate dialogues and relationship?

Q3: While understanding what is being said and wanting to live differently, how is one to approach the problem of livelihood in this world of unemployment and limited opportunities?

Q4: You talk about violence and freedom. But you say very little about law. Why is that? No civilised society can exist without laws. And laws sometimes have to be backed by force which means violence. What do you do when terrorists hold hostages? Do you let them be killed, or storm the building? Where does freedom come into all this?

Q5: You treat cathedrals built by men as the outcome of thought and therefore of no value to understanding, but to me they seem to be inspired by some universal energy linking the two most important factors in man's life: matter and spirit. This unity is the core and movement of humanity. Is there no spiritual value in the inspired works of man?

Freedom from the self

Is the psychological process of time, the movement from ‘what is’ to ‘what should be’, the one of the causes of fear?

Is it possible to end fear?

Sorrow is part of the continuity of memory. Can memory, not only of my sorrow but of mankind's sorrow, come to an end?

While living, without any cause or future, can we end something?

If you go beyond time, is there anything to experience?

Can the self, the ‘me’, the ego, all the self-centred activity which is the movement of memory, end?

What kind of brain is needed for meditation?

What is creation? What is the origin of all existence? Was there a beginning and is there an end to all this?

To uncover the origin, what kind of brain does one need? Is there a brain without self-interest?

Have we a brain that doesn't belong to anything so that it is completely free?

Does language condition the brain?

What is meditation and what is order? Is meditation the feeling of complete wholeness and unity of life?

Is there something not manifested that has no beginning and no end?