Our consciousness is the common ground on which all humanity stands 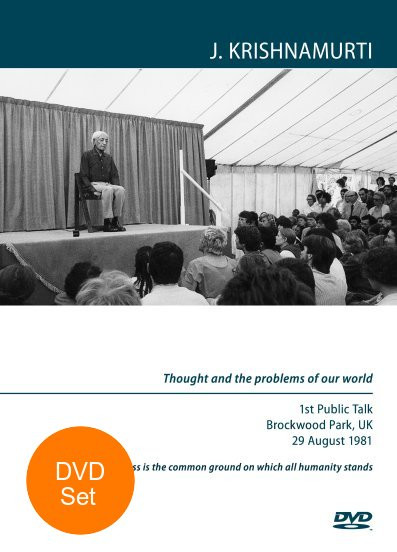 Our consciousness is the common ground on which all humanity stands

Thought and the problems of our world

The politicians are thinking in terms of tribalism. They have not the global outlook or the concern for the whole of humanity.

We are humanity. What we suffer, what we go through in daily life, our quarrels, our disenchantment, all our troubles, religious, psychological, political, is the concern of all human beings.

What is one to do as a human being living in this dreadful world, which is becoming more and more dangerous, more and more insecure, theologically as well as physically?

How will you find out a totally different approach which is not contaminated by thought, because one realises thought is utterly limited?

The computer is taking over all our thinking.

To understand the psychological structure of man there needs be no direction.

Is there a deeper cause which brings about the terrible division between human beings?

There is nothing sacred about thought, yet what thought has invented, thought assumes is sacred and then begins to worship it as being sacred. So thought is worshipping itself.

Can we look at ourselves freely, actually what is going on, without any motive, distortion or direction?

Is relationship merely sensory, sexual? Is it merely a companionship, depending on each other, exploiting each other, trying to dominate each other, possess each other? Or is it much deeper?

The deep cause of division is thinking that each one is separate.

Can the brain function as a whole?

What is the root of fear?

Is love the awakening of the whole of the brain?

Q1: You have often said that no one can show the way to truth, yet your schools are said to help their members to understand themselves. Is this not a contradiction? Does it not create an elite atmosphere?

Q2: What is it in the human mind that wants to follow a leader, a guru, a system, a belief, be obedient to something?

Q3: I am in pain. However I try to meet it I do not come to the totality of the fact. It invariably remains partial and becomes an abstraction, and the pain continues. How can I penetrate the problem without it becoming theoretical?

Q1: We find ourselves living in fear of war, of losing a job, if we have one, in fear of terrorism, of the violence of our children, of being at the mercy of inept politicians. How do we meet life as it is today?

Q2: Is man’s search for something truly religious simply an extension of his eternal acquisitiveness, selfishness, or is it something entirely different, not a reaction but a deep fundamental movement towards an ultimate reality?

Q3: What is right action that will meet everything in our lives?

Q4: What is the right relationship to money?

Q5: You say liberation is not an individual matter but concerns humanity as a whole. Yet liberating insight has been the unique achievement of individuals like the Buddha and the Christ, and perhaps yourself. How can it be a matter of the whole of humanity?

Knowledge, sorrow, death, and to be free of the content of consciousness

Any action born of knowledge must be incomplete, and from that incompleteness all our problems arise.

Is knowledge suffering, and when there is suffering is it at all possible to have love?

Can we stop the whole movement of escape?

The very word ‘sorrow’ colours the fact of sorrow, the pain of it.

I have collected so much this life, so many pictures, furniture, land. I have cultivated my brain through education, through study, through experience and travelled a great deal. If I die, what is the point of it all?

Consciousness is common to all of us. It is not mine or yours, it is common ground, on which humanity stands.

Religious life, beauty and meditation go together. They are not states to be compartmentalised and kept separate.

Is it possible to have a brain that only records that which is absolutely necessary and not record anything else?

There is no exercise of will at all in meditation.

There is a silence which is entirely different, the silence of a brain that has no movement of thought. In that silence alone there can be that which is sacred.

The meaning of meditation is to gather all our energy which is now being dissipated, so that our consciousness is totally empty of its content. Where there is this emptiness and space, there is vast energy. That energy is sacred.