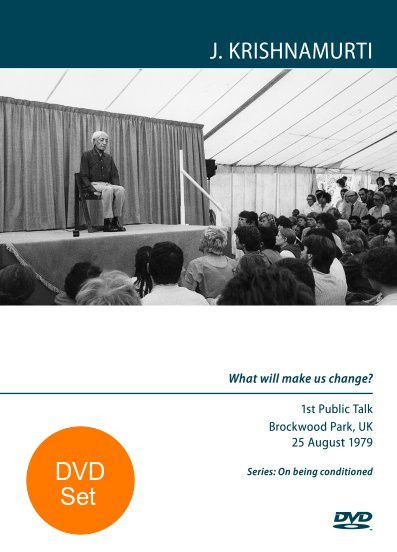 What will make us change?

To think together is only possible if we for the moment forget ourselves, our own problems, our own inclinations, our intellectual capacities.

As human beings living in this terrible world which we have created, can we bring about a radical change in ourselves?

Can you look at the fact - anger, misery, loneliness, whatever it is - look at that fact without the observer saying, ‘I am separate’?

In pure observation there is no effort and therefore the thing which has been put together as image begins to dissolve.

Is thought the instrument of right action?

Can human consciousness be transformed?

Is there an observation which is not the instrument of thought?

Effort implies the action of will. Will is desire, and there are multiple forms of desire. Desire in its activity must create effort.

What is the relationship between the senses and desire?

Is it possible to live a daily life without a single effort?

Q1: Is it possible ever to be free of self-centred activity? Is there a real self apart from the self created image?

Q2: Will the practice of yoga as it is being done in Europe and America help to bring about a spiritual awakening? Is it true that yoga will awaken deeper energy, which is called kundalini?

Q3: Can there be absolute security for man – and naturally woman – in this life?

Q4: Emotions are strong. Our attachments are strong. How does looking and seeing reduce the strength and power of these emotions?

Q5: Why does the mind so readily accept trivial answers to such deeply-felt problems?

Q1: The speaker has said that going to an office every day from nine to five is an intolerable imprisonment. But in any society all kinds of jobs have to be done. Is K’s teaching therefore only for the few?

Q2: Isn’t insight intuition? Would you discuss this sudden clarity some of us have? What do you mean by insight and is it a momentary thing or can it be continuous?

Q3: You say that organisations will not help man to find what we Christians call salvation. So why do you have your own organisation?

Q4: Is sex incompatible with a religious life? What place has human relationship in spiritual endeavour?

Q5: Can thought be aware of itself as it is taking place? Or does the awareness come after the thought? Can consciousness be aware of its whole content?

Q6: I have tried all kinds of meditation, fasting and a voluntary solitary life, but it has come to nothing. Is there one thing or one quality that will end my seeking and my confusion, and if there is what am I to do?

Can one know oneself completely?

Can we know ourselves completely?

Most of us are frightened of not being completely secure physically. Why? Is it because we are always isolating ourselves as a nation, as a family, as a group?

How do you observe fear? For most of us the observation takes place after it has happened. We are asking whether it is possible to observe fear as it arises.

Recognition does not free the mind from fear, it only strengthens the fear.

Is thought, which is time, the root of fear?

Thought takes over an incident that is over, remembers it and pursues it. The pursuit is the pleasure. Why does thought do this?

When you climb a mountain you have to leave all your furniture behind, all your problems, because you can’t carry the furniture that you have collected up the hill. Let go and you will discover that there is a quality of mind, being absolutely free, that is able to perceive that which is eternal.

Meditation, the timeless and love

Guns, submarines, going to the moon, etc., are all actual realities created by thought. Thought has not created nature.

Is there something which is not the product of thought?

Psychologically, thought has invented time as a means of avoiding and postponing, indulging in that which it already has.

Meditation is the ending of time.

In inquiring into something beyond time there must be a complete sense of relationship, which can only come about when there is love.

Can the mind, including the brain, be absolutely quiet?

When you are observing a fact completely, with all your energy, the fact changes.

In meditation, which is to bring about a mind that is absolutely quiet, any form of effort is futile.