Life is a movement in learning 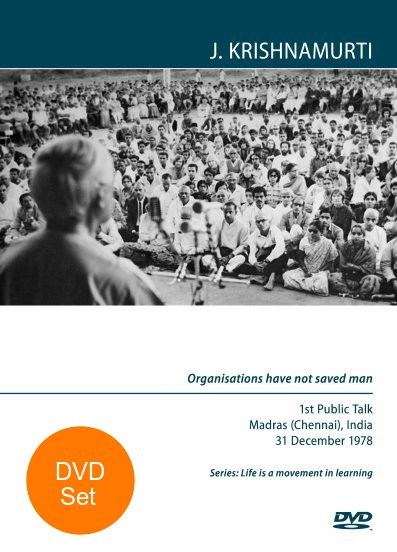 Life is a movement in learning

Organisations have not saved man

There is outer and inner fragmentation. Who is going to change man? Have organisations of any kind helped?

To go very far we must begin very near, which is with ourselves.

Is one aware of one's thoughts, feelings, fears and pleasures?

Can one listen purely, without any distortion? Is there a responsibility to listen to the world and to your own anxiety and sorrow?

Can you observe without any prejudice? To learn, mustn’t the brain be free of knowledge?

What is action in your life?

In relationship, has knowledge any place at all? Can the brain only register what is necessary?

An action that is not the outcome of thought

Is there an action which is not fragmentary, which has no regrets and no sense of incompleteness?

Is there security in the things of thought? Is all psychological security an illusion?

Can one attend without concentration and effort? Does the very thought which concentrates also distract?

Have you ever given attention in which there is no otherness, deviation or distraction?

To attend implies there is no centre from which you are listening.

When you have an insight into the nature of thought it finds its right place.

Is freedom a matter of time?

Is there psychological time at all?

How do we deal with a problem?

Is time involved in love? Is time, a movement in division, necessary?

Can we change fundamentally, radically, not through evolution or time?

Can hurt be abandoned instantly? Can one act without effort or time?

Is there a perception which ends the image without allowing time?

What takes place when you observe only the fact and do not invent the opposite?

Can you resolve a problem as it arises? Are problems produced from a centre?

What brings about disorder in relationship?

What is our relationship with each other? In that relationship, is there order? How will you bring order there?

Is desire, the sensory responses with images thought has created, a factor of disorder?

When pain is over, can one totally forget it, totally non-register it?

When there is no relationship, isn't there fear?

Why has there been so little beauty and communication with nature in our lives?

At the instant of pleasure is there recording?

Culture means to grow, develop the totality of one's life.

Are we aware of division?

Q: Can we discuss the control of government and our day-to-day life?

How will you bring about a cessation of the power of the few, and educate or help the vast majority?

In history, only very few individuals bring about a change. Will you have the energy, capacity, drive, love to bring about a different world?

We have accepted the illusion that we are living when we are separate. Are you aware of this division and its consequences? Why has this division existed, why has man accepted it and how has it come into being?

Can you observe your wife or husband without the memory of the past intruding? When you do look in that way, is there no observer, only observation? Is this possible, not in theory but actually in daily life?

Can you understand what a religious life is?

Q: Has tradition and culture any part in a religious life?

The word ‘religion’ means to gather – gather all your energy to inquire into what is truth and reality, if there is an end to sorrow, and into what is love, and whether one can live without any effort and control.

You can only find what life is, which may be eternal, or nonsensical, or extraordinary, when you understand your daily living and the beauty of life.

Why does the brain form habits, which is tradition, whether it is ten days old or ten thousand years old?

The brain can only function in security. Is there such security?

Will you throw away your illusions, your habits, because you see the reason, the logical consequence of forming habits?

What is a religious mind?

Have the gods been created from our sorrow and fear?

In an inquiry, are you free of fear?

Freedom is observation without conclusion.

Can you observe the whole nature of sorrow? When there is no motive in your examination, is sorrow different from you?

Can a new culture only be born out of a religious mind?

Psychological transformation is the only revolution.

A religious mind has no philosophy because it is with that which is eternally sacred.

Sorrow has to end to understand the religious mind.

The movement of meditation

Putting death in opposition to life, are we afraid to live and afraid to die?

Attachment implies continuity. If it does not end, what happens to the whole movement of consciousness of man?

Is love within this consciousness? Has love a continuity?

Is death the ending of attachment?

When there is complete order in one's life, that can look at cosmic order.

What is attention, inattention and distraction? Does attention have continuity, a centre?

In silence comes that which is eternally, timelessly sacred.

Note: a total of 15 minutes and 48 seconds of missing video is replaced by audio only.