If you fundamentally change you affect the whole consciousness of man 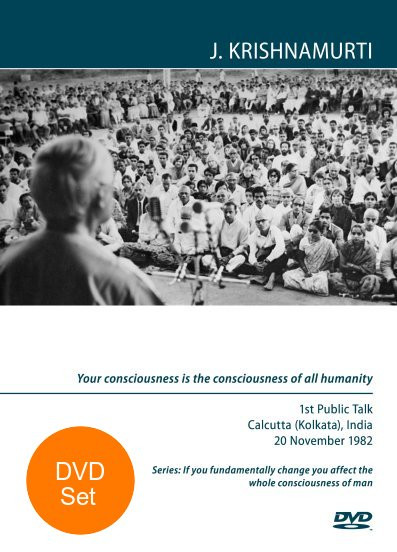 If you fundamentally change you affect the whole consciousness of man

Where there is division, as the Arab and the Jew, the Hindu and the Muslim, there must be conflict.

Why has man become what he is in spite of great experience, great knowledge and vast technological advancement?

The future of man is at stake. The crisis is not only physical but in consciousness, in our being.

You are the world and the world is you. Your consciousness is not yours, it is the ground on which all human beings share and think. You are actually not an individual.

If there is a change in a particular person, how will it affect the whole consciousness of mankind?

Where there is an image about another, there must be conflict.

Is there a new instrument totally different from thought?

What place has knowledge in human relationship?

You have accepted thought as the only instrument man has. That instrument has created havoc in the world.

Is there a new instrument totally different from thought, which thought has not touched at all?

Have you ever tried to observe without the word?

Have we destroyed our senses?

What is desire? Why have people said to suppress it or deny it, if you cannot identify it with something greater?

What is the cause of fear?

Is there actually, factually, psychological time at all?

When you are comparing, trying to become something else, you will never understand yourself as you are.

Where there is a becoming, you must have psychological time. That becoming is illusory.

What is the nature and the structure of disorder?

Why do we have ideals?

One of the major factors of a life which is disorderly is trying to change ‘what is’ into ‘what should be’.

Psychologically, inwardly, why do we accept authority?

When you follow somebody, your brain becomes dull, routine, mechanical, which is the destructive nature of the human brain.

When sorrow comes with the loss of somebody, can one remain with that pain, look it, hold it?

To understand the nature of love, is it possible to be totally free from attachment?

Intelligence is the activity of the wholeness of life.

Psychological time is invented by thought.

What is your daily life?

If you are the rest of mankind then what is your responsibility to man and to what is happening in the world?

When you say you want to be born next life, that you believe in reincarnation, what is it that is going to be reborn? What are you?

You are a vast reservoir of memories, words, pictures and symbols. Your consciousness is the rest of mankind. You are not an individual. What does death mean then?

Can you, while living, end your attachment, end a particular habit voluntarily, easily, quietly? Where there is an ending, there is a totally different beginning.

Meditation is not the practise of any system. When you practise a system your brain becomes atrophied and dull, not alive and active.

Note: a total of 18 minutes and 7 seconds of missing video is replaced by audio only. Poor picture quality from original recording