Can the brain ever be free from knowledge? 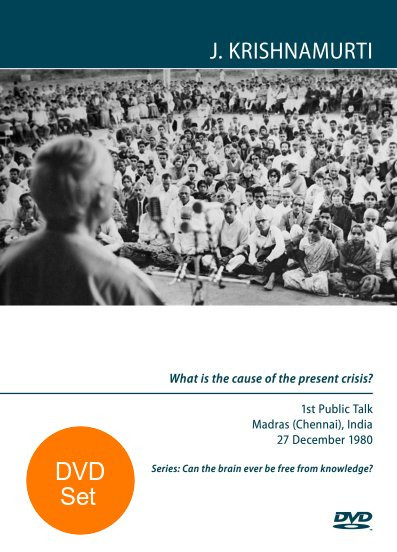 Can the brain ever be free from knowledge?

What is the cause of the present crisis?

If one is merely concerned with one’s own particular salvation then that salvation is the furtherance of selfishness.

Why is it that human beings, living in this marvellous world, have not this sense of love, compassion, care, deep affection?

Corruption is the exercise of thought for its own benefit.

The responsibility is yours, to be absolutely incorruptible.

What is our relationship to another?

What is our relationship to another, actually not theoretically? If that relationship is corrupt, dishonest, exploiting, corruption comes into being in the world.

There can be wholeness only when there is love. The word ‘whole’ means healthy, sane, rational, and also it means holy, sacred.

Can relationship be totally transformed so that there can be love?

Intelligence is not knowledge.

Is there an action, a way of living, which is not based on memory, experience or knowledge?

What is the difference between the human brain and the computer?

There is a difference between optical observation and the observation of thought. Which is it that you do?

Co-operation can come only when there is love.

We are concerned with the salvaging of the brain, of the human mind.

There is no individual brain; it is the brain of humanity.

It is only a confused mind that is caught in the trap of choice.

Conflict must exist when there is a division between thought and the psyche. Why has thought separated itself from something which it has created?

As long as there is self-centred activity there must be loneliness.

When there is no contradiction between the observer and the observed, what takes place in the brain?

Is there order which thought has never touched?

Why hasn’t the brain been able to function in an orderly way?

Excellence is not achieved through competition.

If thought is responsible for disorder, then what is the relationship of thought to our daily life?

When you say, ‘How am I to stop thought?’ it is a wrong question because thought is the controller and the controlled.

Can there be order without the movement of thought? This is real meditation.

Q1: Your appeal to stand up against the corrupt and immoral society like a rock protruding from the mid-stream of a river confuses me deeply.

Q2: You often switch over from mind to brain. Is there any difference between them?

Q3: Even though I understand each and every word of K, the message remains vague. What should I do to understand his message fully?

Q4: Is there really such a thing as transformation? What is it to be transformed?

Q5: I think that the saints created idols and stories to teach man how to lead a good and correct life. How can you call it nonsense?

Q6: You say that if one individual changes he can transform the world. In spite of your sincerity the world has gone from bad to worse. Is there such a thing as destiny?

Q7: Can a teacher inculcate decent behaviour in poverty-stricken children?

Q8: How does one go to the very source of thought so that there is a possibility of silencing the thinking process itself?

Is thought the cause of the decay of man?

Why has man after so many millions of years come down to the lowest point in his existence?

We like to attribute disorder to some fantastic cause, but actually the disorder is in our brains.

The knowledge that we have acquired through education, experience, generations upon generations, may be the cause of our disaster because we are burdened with the past.

What is man? If the machine can do everything even better than you, what are you?

Time is the movement of thought in consciousness.

There is the art of listening, seeing and learning. With that you approach yourself, are watching yourself.

It is not your own psyche, because wherever you go in the world human beings are suffering.

Can the brain ever be free from the known?

Is there a freedom that is independent, complete, total, not associated with any cause or motive?

Can right action take place when there is the operation of thought?

What is the difference between the computer and the brain?

Having time as a factor in the resolution of a problem is unintelligent.

Is fear a movement of time?

What is sorrow? Why do human beings go through tortures? Because we suffer, fear, are pursuing pleasure, we invent gods.

The mind is entirely different from the brain. The mind cannot be understood, known or perceived unless the brain with all its sensory responses is understood.

Q1: Why is it, as medical students, we never notice things in the way you do? We are not serious enough to change ourselves.

Q2: Having been recently hurt, and having heard you ask if we can not-record hurt, can we get rid of the image?

Q3: When I love someone I find myself deeply attached and concerned. How can we be so intensely concerned and not be attached?

Q4: What is your stand with regard to miracles? We are told even you performed what would normally be called miracles. Do you deny this fact?

Q5: You say that one should look at things totally and it is only possible when the brain is completely attentive. What should I do to make my mind behave rightly?

Q6: Is there any survival after death? When man dies full of attachments and regrets, what happens to this residue?