A different kind of intelligence 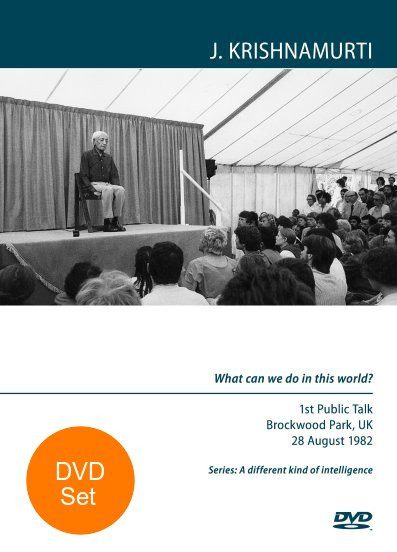 A different kind of intelligence

What can we do in this world?

If we are not committed to any ideology, what is our natural response to the horror going on?

As human beings living in this world with our families and children, what is our action and responsibility?

What are we? Why do we behave as we do?

Is there anything ultimate, any existence without cause? Will this inquiry tell me what I am to do?

The analyser is the result of past memories, experiences, knowledge, but is the analyser separate from the analysed? Am I different from my envy?

Has love or relationship a cause? Can human beings live without cause?

What has happened to mankind?

Does living according to ideals breed conflict? Are facts much more real than our conclusions about the facts?

Ideologies, projected by thought create conflict. Is it necessary to have ideologies at all?

Is fear a cause of conflict, and can it end? Is thought the root of fear?

Is it possible for the senses to operate fully together?

When thought creates an image from sensation, that moment is the birth of desire.

Can the cause be dispelled without effort? Effort is another form of conflict.

Can I observe without movement of thought or time?

Q3: You speak of compassion but claim that action should have no cause. In what way does compassion act without being a cause of action?

Q4: To exist I have to perform daily mechanical tasks without any meaning. This lack of meaning leads to a feeling of destructiveness, an inner rage. I see this clearly in myself and the same process growing in the rise of terrorism, crime and delinquency. There is the feeling that nothing can be done about this arising chaos, that society is destined to collapse. How does one approach this tremendous chaos both without and within oneself?

Q1: Most of us are married or involved in a close relationship which began for all the wrong reasons you have so correctly described. Can such a marriage or relationship ever be made into a really positive force?

Q2: Is our continuous search for security a valid need or a neurotic one? Is there a security that is not the opposite of insecurity?

Q3: Would you please clarify what you mean by brain, mind and consciousness?

Q4: When we see someone being aggressive verbally or physically towards another, we feel a need to intervene. Can such intervention be just? Or is it a mere subtle reaction of the self?

Q5: The violence and disorder of the world demands from us an urgency and intensity of response which we seem to lack. Our intellectual awareness is inadequate. Can there be a deeper awareness which meets the enormity of the problem?

Q6: At the talks you give many of us feel or sense something of immeasurable importance. This is not romantic fantasy, or illusion. It is more profoundly real than much of the rest of our lives. But after I leave I cannot stop the gradual dissipation of that great profoundness. Sir, this is a true tragedy. What can one do?

The intelligence which brings order and peace

Where there is choice, is there freedom?

Has knowledge given us freedom, a just life that is essentially good? Is the good the opposite of the bad?

Can I come so close to sorrow that I am sorrow? Will my own clarity of perception end sorrow?

How can I love when I am caught in a vast structure of memories?

The beauty of death as part of life

With no freedom from travail and agony, and only an occasional sense of beauty, what is death?

Have you ended something without any cause? If I am frightened of death, can I end that fear now?

What is meditation? Is it a becoming, a process of time? Is it a conscious, willed process? Is meditation the peeling away of the miseries of my life step by step?

Meditation is necessary to come upon what is sacred.

That which has no cause is endless.