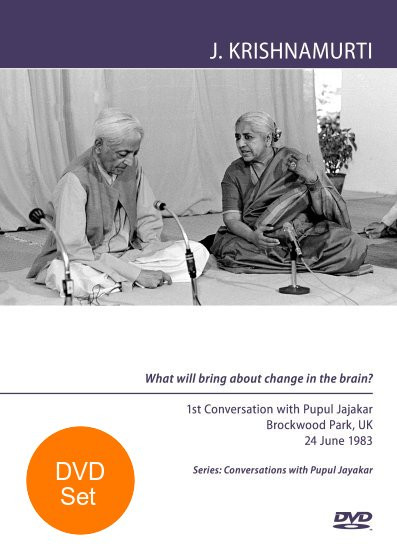 There is only thought, it is not Eastern thought or Western thought. The expression of thought may be different in India and in the West but it is still a process of thought.

What brings about a change in the human brain?

What will make human beings alter the way they behave? This appalling brutality, what will change all this? Who will change it?

Insight is the total absence of the whole movement of thought – as time, remembrance and thought.

Are we aware that we are prisoners of our own fantasies, imaginations, conclusions and ideas?

How do you have a sustained movement of energy that is not dissipated by thought, by any kind of activity?

Is there, or can there be, in the human brain a space without end, an eternity out of time?

Insight is possible only when there is cessation of thought and time.

If there is a verbal sound, I am not listening, I am only understanding the words. But you want to convey to me something much more than the words.

The psyche is a bundle of memories and those memories are dead. They operate, they function, but they are the outcome of past experience, which is gone. I am a movement of memories. If I have an insight into that, I am nothing, there is nothing. I don’t exist.

The ending of the movement which is the psyche, which is time-thought, the ending of that is to be nothing. Nothing then contains the whole universe – not my petty little fears, anxieties, problems, sorrow. After all, nothing means the entire world of compassion.