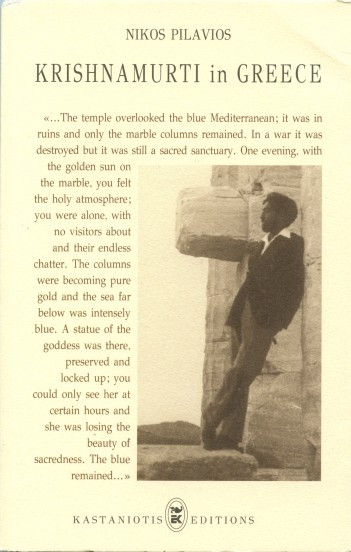 This volume chronicles Krishnamurti's four visits to Greece: in 1930, 1933, 1954 and 1956. The central portion of the book consists of excerpts from talks and discussions held on these occasions, concluding with an article written after Krishnamurti's death. It contains thirteen previously unpublished photographs, one of them dates from his first visit to Athens in 1930.

Author Nikos Pilavios, a well-known TV producer, director and writer in Greece, stresses a connection with Greece, both in terms of its seminal influence on the West and as a place for which Krishnamurti felt a special affection. On page 30 he quotes Krishnamurti, "When you go to Greece and see the Parthenon for the first time, it has extraordinary significance . . . the beauty, the color against the sky, the whole immensity of the Grecian civilization."