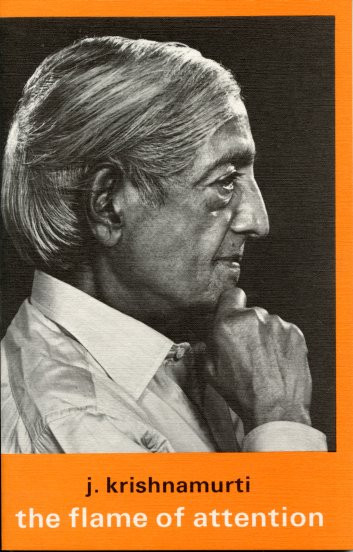 At the age of eighty-eight Krishnamurti continues to make a yearly tour of three continents giving talks to large audiences. This volume contains a talk selected from those given during the year October 1981 to September 1982 in each of the following places: New Delhi, Madras, Bombay, Benares in India; Ojai, New York, in the United of America; Saanen, Switzerland and Brockwood Park, England.

For nearly sixty years he has made such tours, endeavouring to show, to whoever will listen, how man’s violence, sorrow and psychological insecurity are caused by his mental conditioning, by his blind identification with religious beliefs, political ideals and ideational self-elevation.

Idea are the product of knowledge stored in the brain; they arise from a material process and are always limited and subject to the chain of cause and effect; their ‘indigence’ is limited by the material process, it is not holistic. Krishnamurti affirms that when the true nature of this activity in the psyche is clearly observed and understood, the thinking process ceases to be dominant; its function is found to be relative and subordinate, serving man’s needs only at a functional level. Such understanding is pure intelligence free from causality; the meaningless thought processes of ‘self’ – evaluation and related psychological fears, anxieties, insecurity, hatred and violence have ceased.