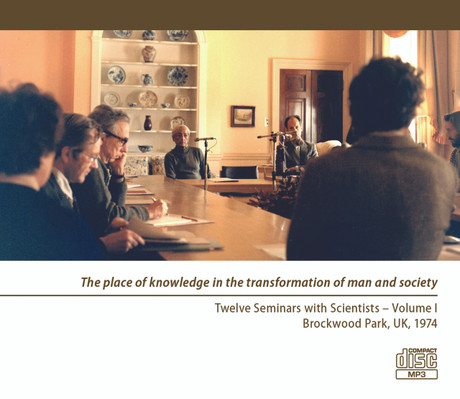 The place of knowledge in the transformation of man and society

David Bohm: What place has knowledge in the transformation of man and society?

Fritjof Capra: To survive we need a more holistic knowledge which is not only rational but is intuitive and akin to mystical and religious knowledge.

DB: Is a creative action possible which is predetermined beforehand as to its goal?

DB: Is there a difference between the technical approach and the artistic approach to the world?

2. Modern physics and Eastern mysticism, the self and seeing - 14 October 1974

Fritjof Capra: The parallels between modern physics and Eastern mysticism are striking, significant and profound.

FC: Quantum theory has made us aware that particles are not isolated grains of matter but are interconnections in an inseparable cosmic web.

FC: The aim of both physicists and mystics is the same: to see into to the essential nature of things. Their methods are thoroughly empirical.

FC: What are the implications of the profound harmony between the worldviews of modern physics and mystical thought?

Gordon Globus: I find myself not agreeing with Krishnamurti and very much agreeing with Freud, believing that there are very deep biological roots to self-interest.

K: Apart from theories and speculations, what is the self, the ‘me’?

K: When you see something as being true or false, can that be changed?

Julian Melzack: There is a prima facie incompatibility in what science is doing in trying to understand man and what we think man to be.

JM: Man is a probability automaton.

Gordon Globus: Your approach is in terms of language descriptions and I don’t think you’re accounting for awareness.

David Bohm: No machine, not even a probability machine, will actually explain quantum mechanics.

DB: How can you define what is meant by being human?

Fritjof Capra: I think we all can agree that man is a quantum probabilistic automaton.

K: Can compassion and love be taught?

K: How can I have passion?

K: How does one go beyond sorrow?

K: Why this desire to be something special?

Karl Pribram: Brain function in perception means that an input from the sense organs becomes distributed across the extent of the cortex to which that input system projects.

K: What is the central factor in human relationship that brings distortion?

K: Is it possible not to have an image of oneself?

K: The question in yoga is to breathe without will or effort. The moment you bring in effort, you cease to do yoga.

K: Effort is the crux of our whole civilization.

K: Are we geared to success, to achieving, to conquering?

K: I’ve never made an effort about anything: being, not being, achieving, not achieving.

George Sudarshan: Corruption and breakdown of integrity amongst academic intellectuals is unaesthetic misogynation that we must be aware of in bringing about a transformation of mankind.

K: As long as there is fear, the other cannot be. My chief concern is not the other but the elimination of fear.

GS: When I am transformed, when I feel harmony, those around me get an inkling of it and perhaps they too are transformed to an extent.

K: Inwardly I know nothing, and only in that not-knowing something new can happen.

K: Can I live in this world without attachment?

K: When you are detached it means that you really love and that you are responsible.

K: What am I without my country, my prejudices, superstitions, fears and pleasures?

Montague Ullman: What we experience as a dream has an antecedent history in an event beyond time and space ordering.

MU: Dreams come upon us in an instantaneous happening at critical moments in the transformation of one form of consciousness into another.

MU: What is the agency that provides the unending source of unerringly apt visual metaphors, the images in our dreams?

K: Is it possible not to dream at all and so have much more energy?

K: During sleep, is there a different form of energy?

K: Meditation is a movement in which contradictions are wiped out.

K: Control is the very essence of disorder.

K: What is the desire, the urge for psychological experience?

K: If there is no thought, is there a thinker?

K: I am unhappy with my laziness. I remain with my unhappiness, not wanting to be happy.