What is correct action in a disintegrating world? (MP3 Disc) 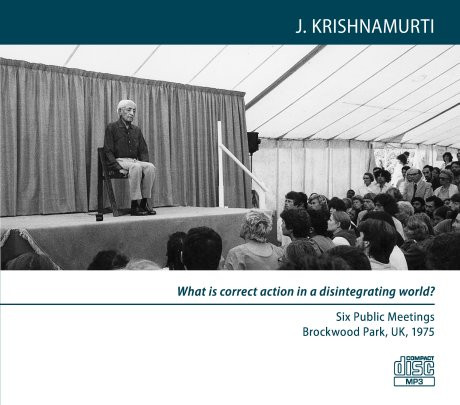 What is correct action in a disintegrating world? (MP3 Disc)

What is the function of thought?

Is there an action that is whole and complete at the personal and social level?

Does thought, having created the ‘me’ make it into a fragment?

Can thought realize its limitation and not spill over into the realm it can never touch?

Is compassion the result of thought?

Can thought be attentive to its own movements?

Can you look at your disorder without choosing and totally deny it?

Is the very act of walking away from disorder, order?

Do you observe directly or from a distance? Is distance actuality or created by thought?

When you observe the limitations of thought, you are left empty, naked, void.

Isn't the only energy of thought we know that which comes in contradiction and duality?

How does desire arise? Is it seeing, sensation, contact, then desire?

Why is there a sense of wanting, lack, pursuing something all the time, which is desire?

Does desire, the wanting of something create fear?

Is there a centre from which all fear springs?

When you look without naming, is there fear?

Have we invented psychological time?

To uncover the unconscious must you analyse? If you don't analyse what are you to do?

Is there a different kind of energy altogether?

The action of total awareness

Q: What does it mean to be aware?

If you are aware every moment your conditioning does not exist.

Is there an activity which is not mechanical?

The mechanical part of the brain follows a line set by thought.

Thought itself is mechanical.

We are all hurt from childhood. Is it the image that is hurt?

It is tradition, part of our education to have images,
according to our environment and culture.

If there is no image the whole brain is unconditioned. Then the brain is on fire. It is non-mechanical and has a totally different kind of energy.

Only in being nothing is there security.

Do you respond according to an image?

Q: How is one to be aware of the content of one's consciousness?

To be totally aware implies no observer. The observer is the past which therefore brings about fragmentation.

All images are in the past. Why can't I drop all that and live in the now?

Is one aware that one has an image about another?

If there is no image how does one respond? What then is relationship with another?

Is there something with no beginning or end?

Can we end suffering at all levels inwardly?

Can there be love, not just personal love but the enormous feeling of compassion?

What is the total significance of death, the ending of what we know as life?

That which ends has a new beginning, not that which has a continuity. Can there be an ending to time?

Has time created the centre, the ‘me’?

What is immortality, eternity, a timeless state? What happens to those caught in the movement of time?

What is the relationship between one who is out of the stream of sorrow and one who is in it?

Can we ever perceive truth?

What is reality? What are the limitations of thought and can it ever perceive truth?

Can we go far unless there is order in the world of reality?

Is there an observation of the field of reality without the movement of thought?

To understand freedom one must deny all authority, which demands great attention.

Having observed the disorder in our lives order comes into being.

Can time have a stop? Which means, can the mind be still not by controlling thought? Then one comes upon that which is timeless, sacred and the very essence of compassion.