Religion is the gathering of our total energy (MP3 Disc) 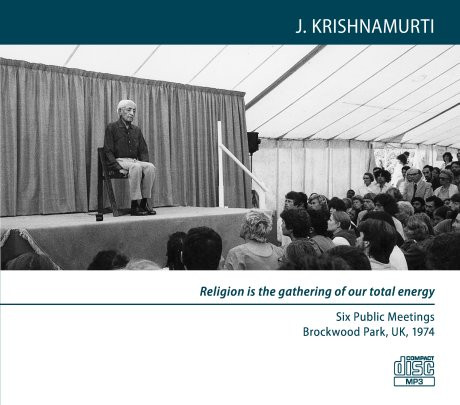 Religion is the gathering of our total energy (MP3 Disc)

Can the conditioned mind go beyond itself?

Can one totally eliminate in observation the activity of the ‘me’?

Is the observer looking at consciousness different from that looked at?

Isn't the observer the past, with his experiences, knowledge, hurts and sorrows?

Being the past, is the observer capable of looking at what is going on around him now?

When one has insight that the observer is the observed what takes place?

With no interpretation, escape or rationalization is there energy to go beyond?

Is thought a slave to time?

Is there psychological time at all?

Can the human mind change instantly?

Why do we abstract an idea from what we see?

Is it lack of energy which makes one postpone? Or, not having the capacity to deal with ‘what is’ one makes an abstraction?

Doesn't action based on idea demand time? What is action in which there is no idea?

Without abstraction can the mind observe sorrow and remain with sorrow?

When you see that the observer is the observed, isn't conditioning broken down?

Can there be relationship if there are images?

The place of pleasure

Q: Why is the mind pursuing pleasure all the time?

Why do people deny pleasure, feel guilty or resist it?

Pleasure begins at the very root of memory.

There is the delight of a sunset. Remembrance of it encourages continuity of the delight which is over.

What place has pleasure, joy and love with regard to memory? Is love a memory?

Why does the mind demand repetition?

Thought is the response of memory, and in itself brings fragmentation. As long as the mind lives in that area there is no freedom.

Is there any field where thought has no place at all?

Can the mind be aware totally and not fragmentarily?

If you really don't know, you will have the answer.

Is the mind capable of seeing thought?

Q: Aware that thought is divisive, what are we to do?

Thought is the response of memory. Are we as aware of this conditioning as we are aware of rain raining?

Can one be aware non-fragmentarily? In complete attention there is neither the observer nor the observed.

Responsibility is implied in relationship.

When the mind is attentive at the precise moment of challenge and response there is no formation of an image.

The image means a formula, concept, symbol or word. Without the image you can't be hurt.

To know how to live without conflict you have to understand what it means to be related.

Can the mind be free of suffering that corrupts all action?

Is analysis of the cause of suffering a wastage of energy, as it involves time?

Has thought brought about suffering?

Is love something brought about by memory, and how does desire distort love?

Is love a matter of time?

Why has the mind separated living from dying?

Can the mind clinging to the known inquire into what is permanent?

The energy to meet problems

Is there an area of the brain not contaminated by thought?

Can the mind uncondition itself without thought which is time?

Is there an energy not dependent on conditioning or culture?

We are educated to control ourselves, in order to be righteous or virtuous. Can we live without controlling?

Can there be choiceless awareness of disorder? Can the brain be absolutely still?

Q: What is the function of being asleep or awake?

To keep awake implies a mind that is not conforming.