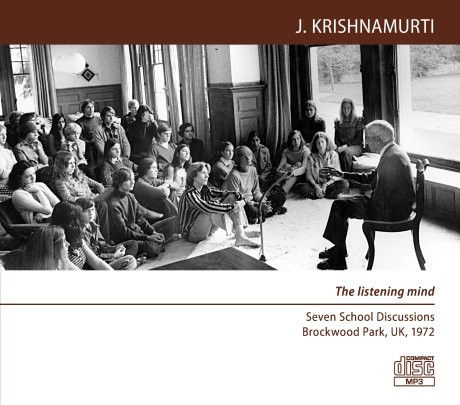 Types of division in the world.

You should leave here a completely psychologically changed human being.

One has to find a balance between the extreme form of tradition and a world in which tradition hardly exists.

Does it take time to learn that division between human beings is a most deadly thing, or do you see it instantly?

What makes you say that division is deadly?

Anger in itself is poison.

The seeing doesn't take time at all. The seeing of it is the learning of it.

Can you see yourself completely, at once?

To live totally differently, any part of the world's corruption cannot exist in you.

Communication without the blockage of images

The expression of thought.

Is there a thinking without the word, image or symbol?

What is the quality of the mind that is listening?

Don't take time to get rid of blockages.

Will won't dissolve the blockage.

What is the state of the mind that is attentive, perceptive?

Is life a battle?

What does death mean to you?

What does life mean to you?

If death is part of living, why do you put it away?

Why are you attached to anything?

All opposites have the seed of their own opposite.

Is living a battle?

I am learning about authority, therefore my mind is essentially humble.

Escapes from being alone.

Thought creates fragmentation as the body, the psyche and death.

Thought, wanting security, has isolated itself.

Is there a mind in which there is no fragmentation at all?

To understand the whole, the part must disappear.

Action from seeing is something entirely different from action of time.

What is your responsibility in a sick society?

What is a good brain?

When you don't compare, the brain has to deal with 'what is'.

What is your responsibility in a sick, insane society?

Negate everything and you will come to the positive.

Consideration and respect for others.

Listening with the unconscious.

Resistance in the conscious mind.

What has happened to my mind when I am listening without resistance?

The extraordinary vitality of the mind and the heart.