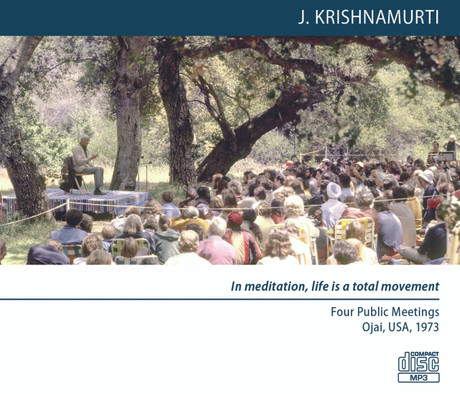 IN MEDITATION LIFE, IS A TOTAL MOVEMENT

Without understanding the totality of human relationship we live in conflict, however intimate we may be.

When there is knowledge as image in relationship there is conflict.

How do you observe the image you have about another?

I have built an image through my interaction with you and I realise to be really related there must be no image.

How am I to be free of images?

How am I not to create images in relationship?

How is a mind not to be hurt at all?

Is life a mere struggle within and without; laborious, painful, anxious, and then death?

What place has thought and what is the structure of thinking?

Our life is based on thought which is never new, never free, so we are slaves to the past.

How is the mind to be totally, completely free of fear, not only at the conscious level but deeply?

Can thought not interfere with an incident which was a delight yesterday; just leave it?

The movement in harmony between the known and the unknown is creativity. This is the significance, the meaning of life.

In our life there is very little order.

Most of us conform, which is the very essence of disorder.

We conform because we want to succeed inwardly or outwardly; success to us is the most important thing in life.

Order and virtue come with the understanding of disorder.

Why do we get educated?

We have made love pleasure, sexual or otherwise. Why have we made sex such a colossal affair?

Can there be suffering in love?

What is death? Can the mind ever be free from it?

What is it that dies?

What part does religion play in one’s life?

How do you know that you or anyone has attained enlightenment or reached the highest form of religious thought?

How can a mind which is always in conflict within itself find that which has never been in conflict?

Meditation is a daily life in which there is no control whatsoever.

When dealing with psychological facts, is the observer different from the thing observed?

A certain part of the brain can function efficiently only when it has total order, security.

The moment you are aware you are silent it is not silence.

Silence is the highest order.

In silence, parts of the brain which have not been occupied become totally active.