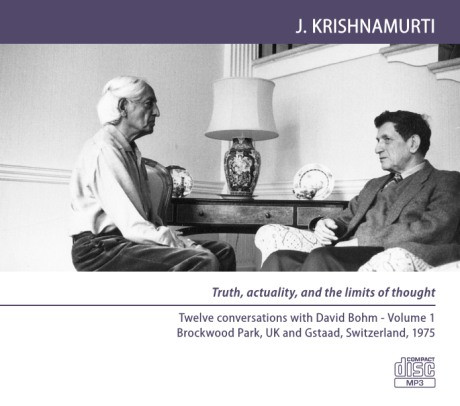 Anything that thought thinks about or reflects upon or projects, that is reality. And that reality has nothing to do with truth.

The art of seeing is to place reality where it is, and not move that in order to get truth. You can’t get truth.

How am I to empty that consciousness and yet retain knowledge – otherwise I couldn’t function – and reach a state which will comprehend reality?

Seeing 'what is' is action

If truth is something totally different from reality then what place has action in daily life, in relation to truth and reality?

Seeing what is is action.

What place has love in truth?

When I separate you, in that separation love cannot exist.

How are you to convey the sense of truth to a student?

As long as I live in the field of reality, which has its own energy, that energy will not free me.

Thought cannot bring about an insight

Is there a thinking without the word?

The action brought about by thought into the investigation of an analysis is always incomplete.

Insight is complete. It is not fragmented as thought is. So thought cannot bring about an insight.

I must have an insight into conditioning otherwise I can’t dissolve it.

What takes place when I have an insight that the observer is the observed?

In nothingness there is complete security and stability.

Why has desire become such an extraordinarily important thing in life?

Can I desire truth?

Is that nothingness a hypothesis, a theory, a verbal structure, or truth?

In dying to the reality only then there is nothingness.

Attention implies that there is no centre

Consciousness, because it is in constant movement, has never found an energy which is not contradictory, which is not produced by desire and thought.

Attention implies that there is no centre.

Is there a perception, a seeing outside the space which is part of consciousness?

How does this perception which is beyond attention, beyond awareness, beyond concentration come about?

Thought is rather superficial, it’s merely a very small part of the operation of the brain.

Facing the truth of death

If you can understand suffering, face it and not escape from it, that has quite a different energy.

Truth is a pathless land.

There is something really tremendously mysterious.

Knowledge is becoming the curse.

When the mind, with all the confusion, is nothing, not a thing, then perhaps there is the other.

How does science investigate the mysterious?

Can consciousness, which is filled with the things of thought, empty itself?

Thought cannot possibly apprehend, comprehend or be aware of the whole.

What is the substance of thought?

What is the basic reason for thought to be fragmented?

What is the substance of thought? Is it a material process, a chemical process?

There is a total perception, which is truth. That perception acts in the field of reality. That action is not the product of thought.

Thought has no place when there is total perception.

Thought never acknowledges to itself that it is mechanical.

Total perception can only exist when the centre is not.

Can there be a total perception which completely heals the brain?

What benefit has culture?

Does speech come before thought?

Is it possible to say something without the operation of thought?

Is attention a conscious process?

Is love the factor of profound change?

You explain all this, and you say that whatever the damaged brain – which is the result of thought and tradition and all the rest of it – whatever it does will produce further damage. So, because you point it out, I realise that. That is the first necessity – I realise it. Then, after I’ve realised it, you talk to me at a depth which thought has not touched. You planted a seed.

Truth does not belong to an individual

Krishnamurti’s ‘process’ and his early years.

The Indian tradition says that there is a manifestation of goodness which happens very rarely.

Truth does not belong to an individual.

What one says is truth. But it becomes truth to me only when I have washed away my selfishness.

To stay with – not the word, not the description, not the person – but to stay with that penetrating truth.

What is wisdom which is not a movement of thought?

If there is attention is there choice?

Why has man divided perception?

What is wisdom which is not the movement of thought?

What place has the man who perceives truth in this world of reality?

Truth operating in one brain clears that brain.

Mustn’t there be emptiness for the perception of truth?

Thought and the brain.

Why has the self become important?

Can there be only sensation, thought, and no desire?

Can desire - which brings illusion, self-deception and all the complications of changing desires – can the root of desire be dissipated?

What prevents one from having a real insight? That is, seeing the truth of desire and therefore end it. Is it that we have never asked this question?

When there is no desire whatsoever then there is a total revolution, and that will affect the consciousness of man.

Is there a movement, an action that keeps the brain pure, uncontaminated?