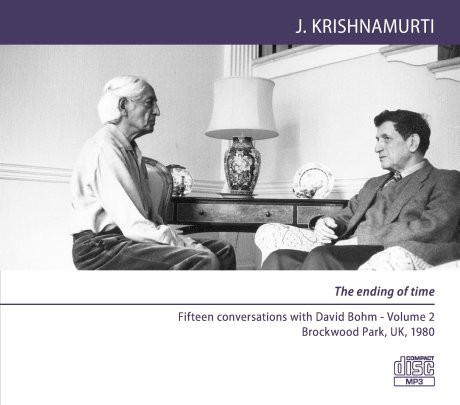 The roots of psychological conflict

Has humanity taken a wrong turn?

What is the root of this tremendous inward conflict of humanity?

When I am trying to become something it is a constant battle.

Can the brain itself see that it is caught in time and as long as it is moving in that direction conflict is eternal, endless?

Can the mind realise, resolve a psychological problem immediately?

Has mankind journeyed through millennia to come to this: that I am nothing and therefore I am everything and all energy?

Cleansing the mind of the accumulation of time

Time is the enemy of man.

Is there a beginning which is not enmeshed in time?

We said nothingness is everything and so it is total energy. It is undiluted pure, uncorrupted energy. Is there something beyond that?

Has man ever been free from the ‘I’?

That emptiness can only exist when there is death of the particular.

Why has man given supreme importance to thought?

Q: Is the 'ground' indifferent to mankind, as the physical universe appears to be?

How does one find out if there is something more than the merely physical?

Q: Why is it that theories are necessary and useful in organising facts about matter outwardly, and yet inwardly, psychologically they are in the way, of no use at all?

Seeking security for myself, for my family, for my group, for my tribe, has brought about division.

Why has man given importance to thought as the supreme thing?

If I accept I am irrational completely, I am rational.

Breaking the pattern of egocentric activity

What will make a human being change, deeply, fundamentally, radically?

Will I, as a human being, give up my egocentric activity completely?

What happens to me when I meet something that is completely solid, immovable, absolutely true?

Psychological knowledge has made us dull.

The ground of being, and the mind of man

Why has having ideas become so important?

What is the difference between a religious mind and a philosophic mind?

What is the human mind’s relationship to the ground?

Why has man accumulated knowledge?

When you love somebody there is no ‘me’, it is love. In the same way, when I say I am humanity, it is so. It is not an idea, it is not a conclusion, it is part of me.

There is only one thing and that is to discover that what I have done is useless, ashes. You see, that doesn’t depress one. That is the beauty of it. It is like the Phoenix, born out of ashes.

Can insight bring about a mutation of the brain cells?

Can insight change the brain cells?

In the brain is there an activity which is not touched by consciousness?

Insight is not dependent on the material process, which is thought.
Where there is violence, peace cannot exist. Where there is peace, is there violence?

As insight is causeless, is not born out of cause, that insight has a definite effect on that which has cause.

The material process acts in ignorance, in darkness. This flash of insight enlightens the whole field, which means ignorance, darkness has been dispelled.

Is there a totally different way of approaching the whole turmoil of life?

As long as the centre is creating darkness, and thought is operating in that darkness, there must be disorder, there must be everything as society now is. To move away from that you must have insight.

Insight can only come about when there is a flash which abolishes not only the darkness but the creator of darkness.

Human beings have been acting according to one pattern, responding to hatred by hatred and so on. There are those few, perhaps many, who did not. Why has this division taken place?

The man who is living in darkness can move away at any time to the other. That is the point: at any time.

What happens to a mind that has no conflict?

Can insight be awakened in another?

What is the relationship to society of a man who has insight? What is his action with regard to war and the whole world?

Q: What is the significance of mankind in the universe, or in the ground?

‘Y’ is concerned with ‘Show me, prove it to me, what benefit it has, will I get my future...’ And he is looking at ‘X’ with the eyes that are so accustomed to this pettiness. He reduces that immensity to his pettiness and puts it in a temple, and has therefore lost it completely. But there is something so immense that ‘X’ says, ‘Please do look at this,’ and ‘Y’ translates this into, ‘Show it to me, prove it to me, will I have a better life?’

To divert the course of man’s destruction somebody must listen.