A Revolution in the Mind (MP3 Disc) 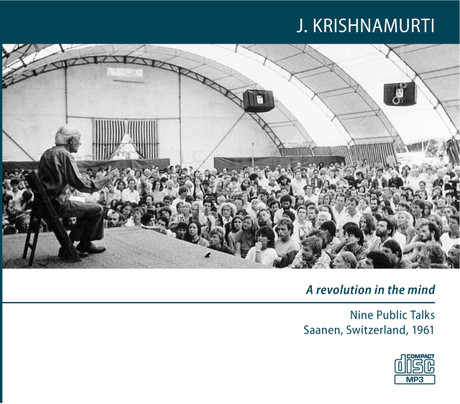 A Revolution in the Mind (MP3 Disc)

• A serious mind is constantly aware and thereby purifying itself.

• The world is broken up in fragments: politically, religiously, economically, and in thought and in philosophy.

• A mind that is creative has no pattern. Only such a mind can deal with the problems of the world.

• We are concerned with the shattering of the mind, so out of that shattering something new can take place.

• Q: Why is it that we find it difficult to put a right question?

• Q: What is it that is preventing us from going into a problem deeply?

• Q: To tear down everything in order to be free of fear is too difficult for ordinary people like us. Isn’t there a gentler way of doing things?

• There is no security either outwardly or inwardly.

• To find out what peace is, one must be totally free of violence.

• What is it to see something totally?

• The brain, with its mechanical habits, its animal instincts, its urge to remain in safety, can never see anything totally.

• The seeing totally of something can only take place when the brain is highly sensitive and recognizes its own limitations.

• Right order can only come when there is destruction of the mind that demands order.

• Is the mind capable of being completely and totally free of all conflict?

• One cannot do anything about the conflict in the world, but one can do something radical about our own inward conflicts.

• As long as there is an experiencer and the experience as two different states, there must be conflict.

• Do we see life, a tree, another person through ideas, opinions and memories?

• Can we see the totality of conflict, and be in contact with that totality?

• Q: What is the nature of creation?

• Q: When do we know that we are actually facing the fact and not an idea about the fact?

• Q: If you go through to the end of conflict within yourself, must you accept the conflict in the world?

• Humility is not virtue. Anything that is cultivated, disciplined or controlled does not bring it about.

• Humility is not a thing to be sown and reaped; it must come into being.

• Is learning accumulation of knowledge?

• All change implies violence, and through violence there is nothing new.

• Control, subjugation and conformity to a pattern implies violence.

• Humility is the state of mind which has completely discarded the accumulative process and its opposites, and is from moment to moment aware of ‘what is’.

• If you go very deeply and seriously into the question of humility, you’re bound to question the whole problem of learning.

• The learning of words prevents the seeing of things as they are.

• A mind that is crippled with authority can never be free to find out.

• To be aware of every movement of thought, the implication of every word, the significance of every desire, and not to deny or accept but to watch choicelessly, frees the mind from authority.

• Meditation is not a process of disciplining, controlling or shaping the mind by desire or by knowledge.

• The mind has to be aware of its own thoughts, the motives from where thoughts have arisen, the cause of them.

• A mind that is ambitious is always seeking, wanting to be successful, comparing, fulfilling.

• In self-knowing one begins to lay the foundation of true virtue, which is not recognisable by society or by another.

• It is possible to be totally free from sorrow when the mind no longer seeks explanations but faces the fact.

• Can each one of us intelligently, sanely face the fact when someone is dead and one is lonely?

• Why does each one of us have sorrow? Is it possible to be rid of sorrow completely?

• Sorrow is conflict. Why are we in conflict?

• Can the mind live, function, be, without any shelter?

• Can the mind face every fact as it arises and never seek escape, facing ‘what is’ all the time, every minute of the day?

• Effort means being in conflict, in which is involved achievement, suppression and denial.

• Have we ever observed our self as it is, consciously or unconsciously, without trying to change, substitute, transform, suppress what we see?

• A mind and a brain in conflict is never quiet.

• What is in conflict all the time becomes dull.

• That reality which is not measurable, which is unnameable, which has no word, comes into being only when the mind is completely free and silent, as it is in a state of creation.

• Q: The state of total attention and desire without a motive, are they the same?

• The educated, recent mind cannot possibly inquire into the unconscious, which is old, which is the residue of time, of the race, of experiences.

• The unconscious is the repository of infinite knowledge of things that have been.

• Examining and interpreting fragmentarily strengthens the layers of the unconscious, hidden mind.

• The unconscious must be approached negatively because you don’t know what it is.

• If there were no tomorrow, or the next minute, would there be fear?

• Dying to thought is the ending of fear.

• The whole content of consciousness is a process of thought, therefore it is bound within time.

• Can the mind be free of time?

• Dying is dying to thought.

• A revolution in the mind is the way of religion.

• Every experience is shaped by the past. Is it possible to deny all experience?

• To find reality or God, the mind must be alone, uninfluenced.

• How frightened we are to destroy everything that we have accumulated.

• When there is the destruction of all authority man has created in his desire to be secure inwardly, there is creation.

• To the religious mind there is no time.

• The religious mind does not belong to any individual. It is apart from all human endeavours, demands, urges and compulsions.