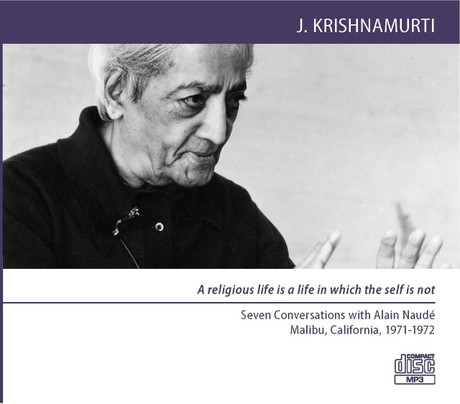 • Why do we divide the world, the human being and the divine?

• To find out if there is something beyond this consciousness I must understand the content of consciousness. The mind must go beyond itself.

• Do we realise that the observer, seeing the content, examining, analysing, looking at it all, is the content itself?

• If the observer is the observed, what is the nature of change in consciousness?

• Man has become accustomed to take it for granted that will is the only way to bring about change, but will is not the factor of change.

• Consciousness only exists when there is conflict between fragments.

• Q: Do good and evil really exist or are they simply conditioned points of view?

• Goodness is total order, not only outwardly but inwardly especially.

• Is virtue the outcome of planning?

• Will is the concentration of thought as resistance.

• Are poisonous snakes, sharks and the appalling, frighteningly cruel things in nature evil?

• The moment we assert that there is absolute evil, that very assertion is the denial of the good.

• Goodness implies total abnegation of the self, because ‘the me’ is always separative.

• Order means behaviour in freedom. Freedom means love, not pleasure. When one observes all this, one sees very clearly that there is a marvellous sense of absolute order.

• Unless I am free from the vulgar, I will continue representing the whole vulgarity of man.

• When you say, ‘My brother is dead,’ and ask whether he is living, as a separate consciousness, I question whether he was ever separate from the stream.

• Realising that I am like the rest of the world, that there is no ‘me’ separate, I can incarnate if I step out of the stream.

• Change takes place away from the stream; in the stream there is no change.

• What happens if you step out of the stream? The stepping out is the incarnation.

• When the man of the stream steps out and looks, he has compassion.

• Q: One finds in various teachings the idea of masters, conscious entities who work for the good of mankind. Is there a reservoir of wisdom? Do such entities exist, or does man want to have myths?

• Is your mind capable of not being held in the reservoirs of goodness or violence?

• When you understand these two opposites and go beyond them, meditation is not in terms of vision or action, but the state of silence which then is operating, an energy which then flows. That energy has no character.

• When one asks, ‘Is there a hierarchy, a master, a group of evolved entities?’ you are asking from a point of view, or from desire, from hope.

• What is the relationship between the current of vulgarity and that which is beyond and above the opposites?

• The stream of vulgarity has its source in the self, ‘the me’, the ego.

• When there is no self, there is a responsibility for humanity.

• What is the relationship between this stream, the self which is perpetuating the stream, and the unknown?

• How is a man who is in the stream to understand instantly, without going through the evolutionary process?

• You step out of the stream if you deny time, in the sense of becoming, being, achieving, comparing.

• Can the mind, without any motive, negate the self?

• Q: Are the various scriptures of India and the Middle East similar to or in contradiction to your teaching?

• Can thought end right through one’s consciousness? Must thought not end for something new to be observed?

• How does the mind look at itself? Does it look as an observer different from the observed, or without the observer and therefore there is only the observed?

• What has happened to the mind that has discarded the weight of becoming, of tradition, myth, gurus and authority?

• Remaining with the fact of hurt.

• When you are nothing, you love.

• There is a movement in silence that has no beginning and no end, a movement that is always new.

• Inquiry is different from effort, from seeking, from achievement.

• Q: Is there any connection between the supernatural and religion?

• Is a religious life to lead a good life?

• A religious life is a life in which the self is not.

• We get caught in the so-called mysterious. But when the self is not, there is a greater, vaster mystery.

• Self-knowing is much more important than acquiring some kind of power.

• What place has meditation in religious life?

• Meditation is not control, is not a practice, is not an effort to achieve a glorious experience, or to remain in a particular state of consciousness.

• If the self is, the religious life is not. Can one dissolve the self?

• Why are certain human beings entrenched in the myth of Jesus or Krishna?

• Where there is freedom there is joy. It is that quality of mind that has this sense of joy and freedom that perceives.